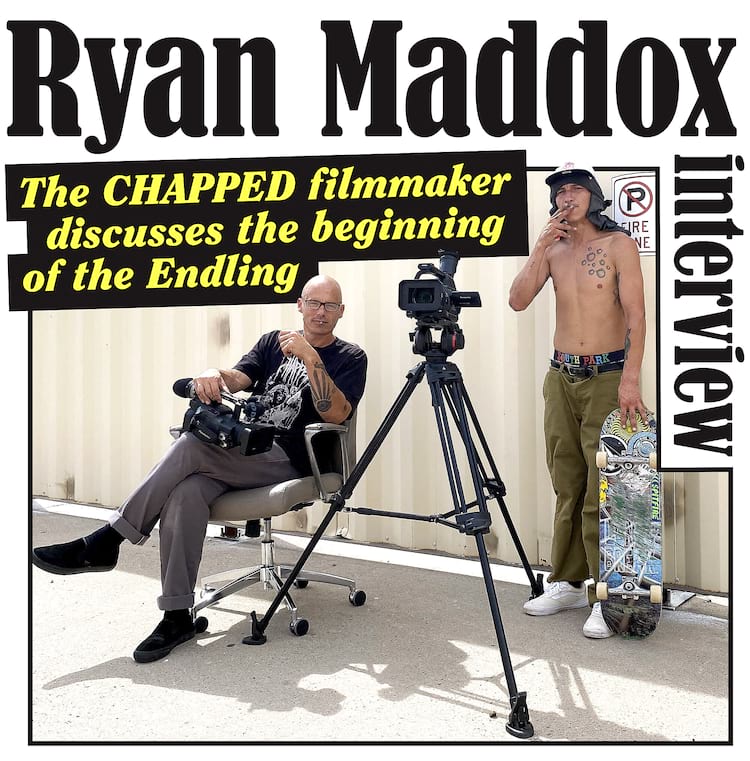 RYAN MADDOX stays busy—whether it’s photography, filming or music, his creative endeavors always radiate his love affair with skateboarding. This guy gives back. He’s contributed photos and video to Thrasher for the past ten years. Endling is the fifth full-length video he’s created under the CHAPPED crew banner. We caught up with Ryan to talk about his latest project and more.

Hey, Ryan, congrats on the new video! Tell me a little about it. How long have you been filming for it?
Thanks. I’m really anxious and excited. This is the fifth full-length video in five years from the CHAPPED series. This was about a year and a half of collaboration with around 75 skaters, artists and crew members.

What’s the significance of the name, Endling?
An endling is the last living member of a species. Once the endling dies, the species becomes extinct—gone forever. In a way, we are all endlings to some small extent. As individuals, we are all the last of our kind. This video continues the death and transcendence themes from the previous Black 2.0 release last year.

How did the video series come about? Was it just a natural progression of skating with your homies?
We are always filming. Albuquerque is hands down the best place to be for me and for what I love to do. I hope we never stop. 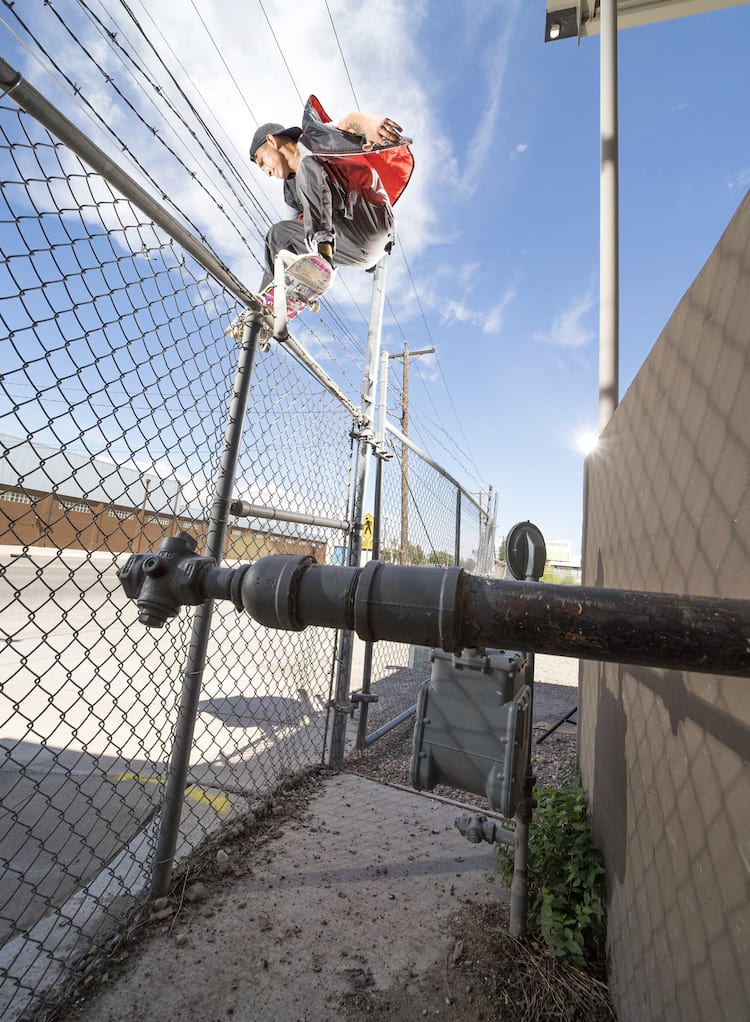 Jake The Jeweler can't be caged with this barbed wire gap ollie. His fifth full part in the CHAPPED series is packed with hammers and heavies 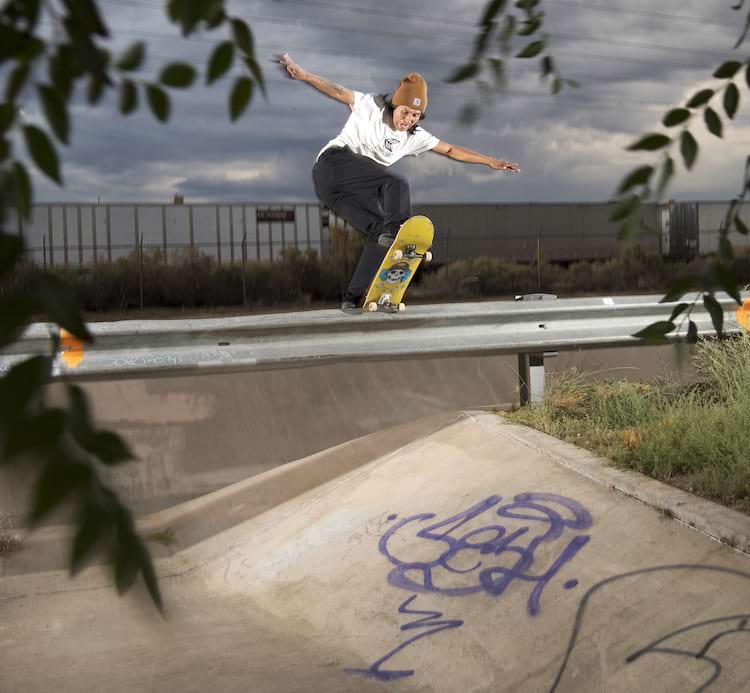 This front blunt pop over was no problem for Bryant Chapo. He always finds a way to remind us—he's not like us... at all. He's something else

Who is featured in this one?
This is probably the most focused and organized CHAPPED video I’ve ever made. There are full parts from ABQ faves like Jake The Jeweler, Mike Dominguez, Agush Agushi, Monico Candelaria, George Owen, and the ever insane Bryant Chapo. Stack on top of that another 35-40 rippers from New Mexico, Texas, Arizona, Colorado and California. This video is packed with some of the most interesting and inspiring individuals I’ve ever crossed paths with.

Who in this video was a new addition to your crew? How’d that come about?
Probably the most significant person to rise towards the front of the pack was Jon Rogers from a little town by the border called Las Cruces. I met Jon when I lived there ten years ago and we’ve been in touch ever since. He’s one of the only people I’ve seen who can make techy hammers not look weird. He really stepped up and got in the winner’s circle for a solid section in this video that he shares with Wildman. I can also say it’s pretty exciting to feature skating from some of our heroes like Clive Dixon, Clint Walker, Lance Mountain, Ray Barbee and Wee Man.

How did you connect with Lance Mountain and Ray Barbee? They seem like wildcard additions to the largely Albuquerque lineup.
Skateboarders! I’ve had had the privilege of shooting for Black Label for the past few years. John Lucero introduced me to Lance back in 2018 and we quickly became friends and started playing music together. A few years later, Lance invited Ray to a session while I was in town and we’ve been in touch and skated a few times since. He’s another music lover! I feel right at home with those guys, and skating with them is no different than going on missions with my friends back in Albuquerque. 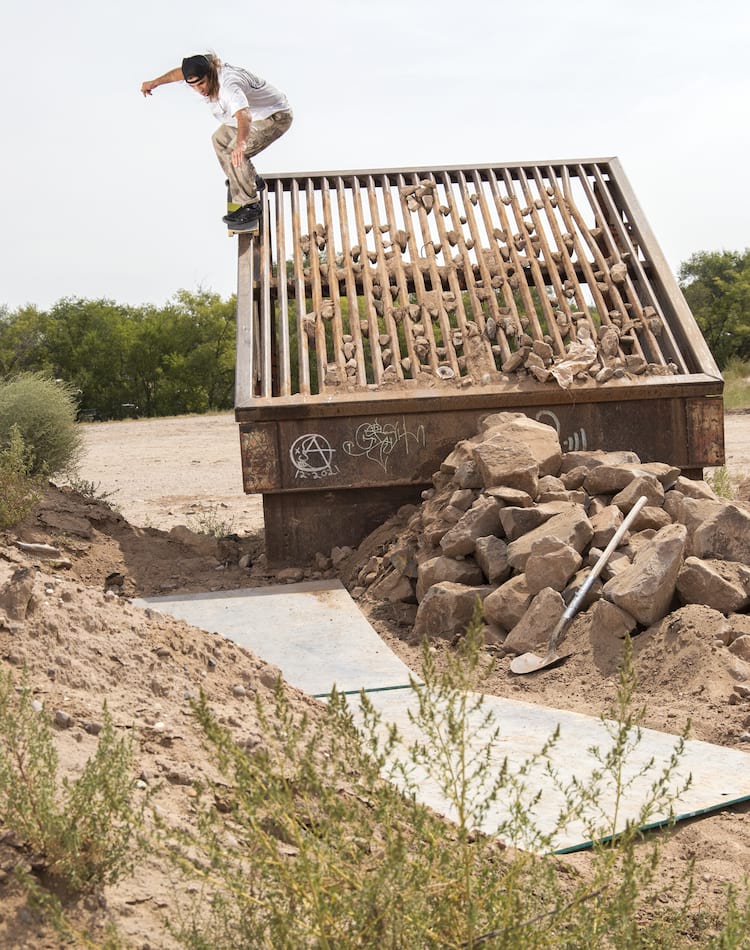 "Wildman" Mike Nypaver drop-in grind in the Bosque. Odd obstacles like these are peppered all over the Chihuahuan Desert 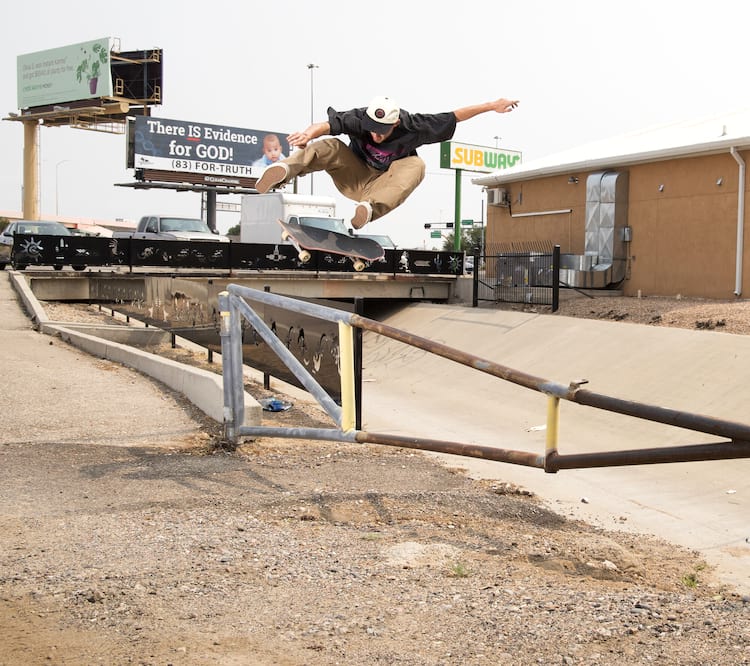 If there is any evidence for God, it has to be Mike Dominguez and this kickflip into the rough 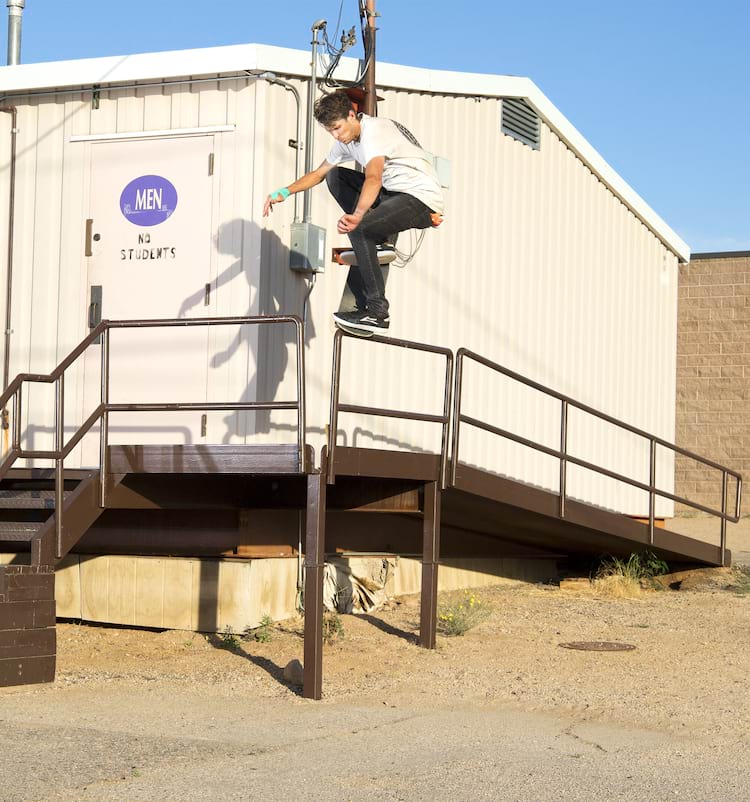 Monico Candelaria stands tall with a nosegrind off this school portable. Class is in session!

Whose part are you most excited to show the world?
We went pretty hard on the cinematic scenes—for us, anyway. I don’t know what I’m doing and it’s difficult getting help for free. We set some stuff on fire. I burned my face and lips shooting goofy pumpkin effects. That was lame. Despite the amateur hour, there are a few shots we were able to capture with our ragtag crew of random weirdos that I’m actually pretty proud of. As for the skating, I think the first ever CHAPPED full part from Monico Candelaria is something we should all be excited about.

Describe the process of filming for this video. Is video making your full-time gig?
I work for NBC Universal, and occasionally other studios, in the transportation department on shows. Making skateboard films is just what I love to do. CHAPPED is not a business and I sink most of my money into making these videos. I commission artists like Sam Hitz, Mark Foster and Ex-Teenager because they’re my faves and inspire me to make stuff. I film the folks who get me excited and usually do most of it myself—long lens, fisheye and photo. Thankfully in recent years, friends have really stepped up and began contributing with extra angles and photos. We even had a second unit going simultaneously in another state one day or at another time in the same city. Two crews on opposite sides of town filming for the same video—that’s a blessing. I’m really fortunate to have everyone be a part of it.

Did you go on any trips for or did you just stay put in New Mexico?
We didn’t really go on any formal trips for this one, but life takes you places and I’m filming wherever I’m at. When my mom passed away, I got Mike Dominguez in the car with me and we filmed around Alabama while I handled family business. California trips are the best for me, though, and I was recently working for two months on Quantum Leap in LA. That was a fun time. 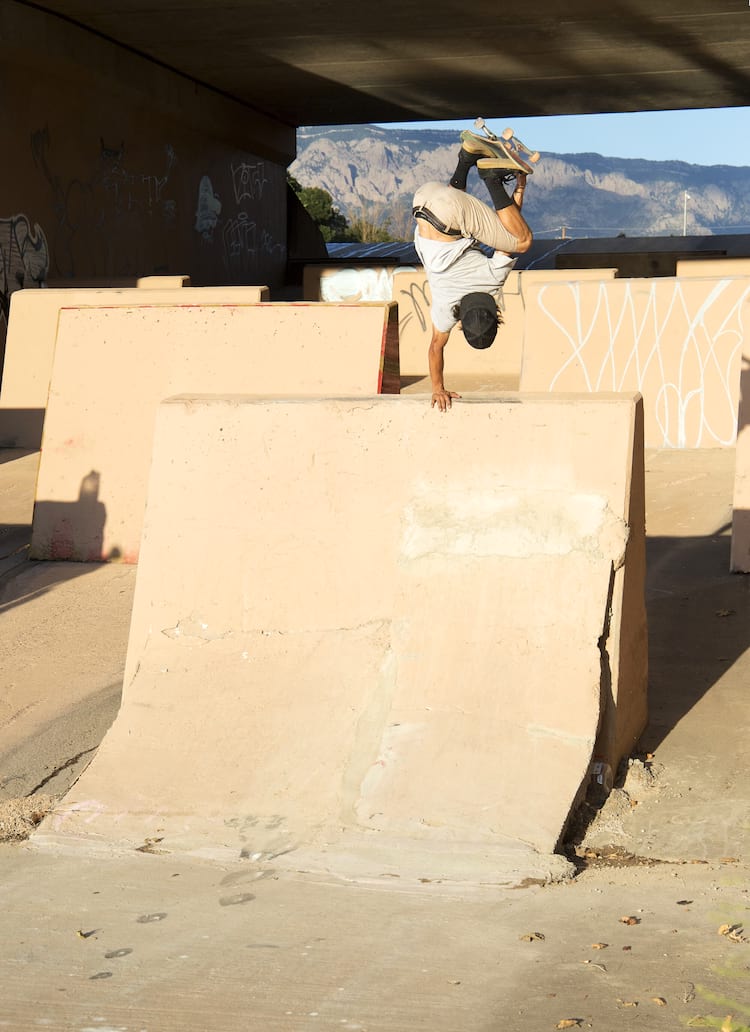 Adam Mercado finds a street egg and stalls for lunch 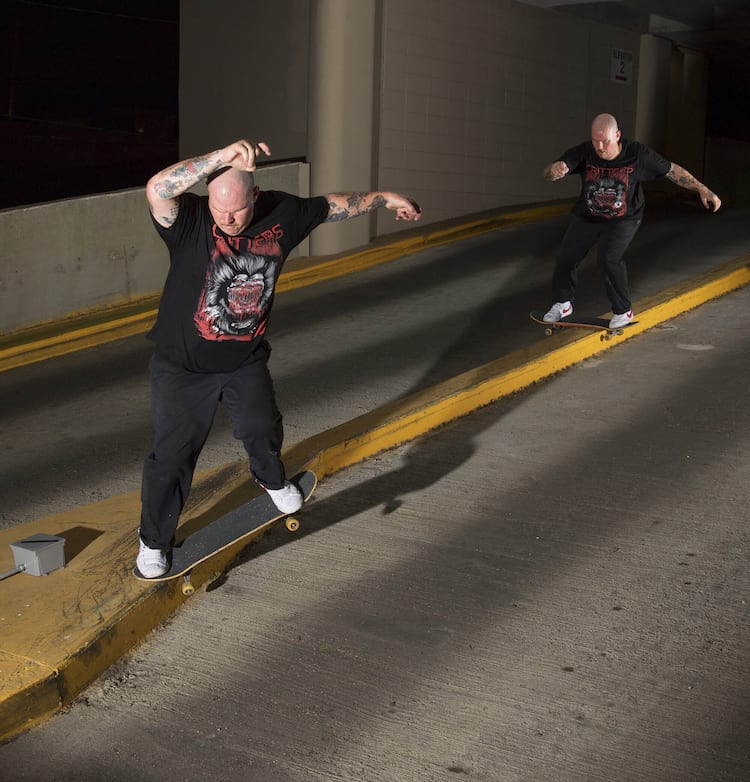 I noticed you are dealing with some pretty gnarly back issues. Talk about how that came about and how that affects your filming.
I have pretty severe degenerative disease in my lower spine. It’s debilitating and I’ve changed my entire life over the past 12 years dealing with disc-slipping episodes. Therapy, a healthy lifestyle and diet is essential to continuing to using my body at all. I can’t really stand for very long to film anymore, so I’ve started taking my chair everywhere with me. Ditches, downtown, illegal backyard pools, pizza-joint celebrations after—I will have my chair. Whatever it takes for us to keep doing it. It’s just getting pretty tough and silly.

You also are no slouch on the board. How often do you skate?
I skate every day if my back will let me. No matter what’s going on in my life, I live to scare myself a little and sweat. I hate being stuck inside all day and it feels great to adjust my spine eating shit on the concrete and getting all that blood flowing. I enjoy pushing myself to do something somewhere every day, but as far as being strong enough for real clips, those are a little more few and far between right now. I like curbs and curbs that become spots. Can we even call them spots? I usually hit up Monico for 360 camera lines. He’s great at those. But everyone will tell you, I’ll hand the phone to any poor soul not already skating.

To me, your past videos are definitely a result of your auteur spirit—you personally doing all the filming, editing and even music for them. Did you do all the music for Endling as well? Is making your own music an economic or stylistic decision?
We made about six songs for this video including the intro and the promo. I love making music and this is just another opportunity for an outlet since I’m not playing in a band in Albuquerque right now. I made all these songs with the brilliant Dr. Daniel Westcott in Berkeley sending tracks to each other via email. He’d play a random drum song set to my given time length and specifications and I’d try and write guitar and create some sort of mutant song. I’m most proud of the intro he put together using all real instruments. I was so impressed on all the layers and sounds from real things and it all came together beautifully. We played in this punk band called QueerWulf together 20 years ago; I never imagined we’d be here right now, that’s for sure. Also, I want to mention that Evan Smith sings vocals on one song. 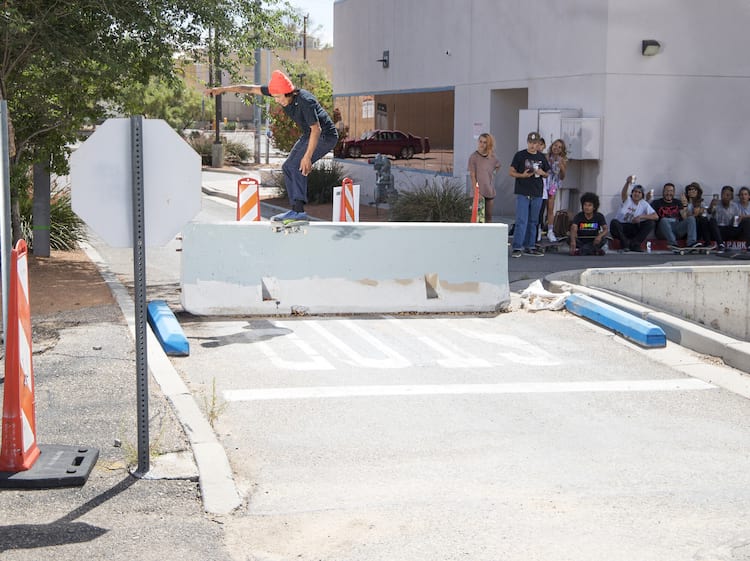 Bryant Chapo stokes the crew with a noseslide 270 shuv. Sessions like this last forever in the heart 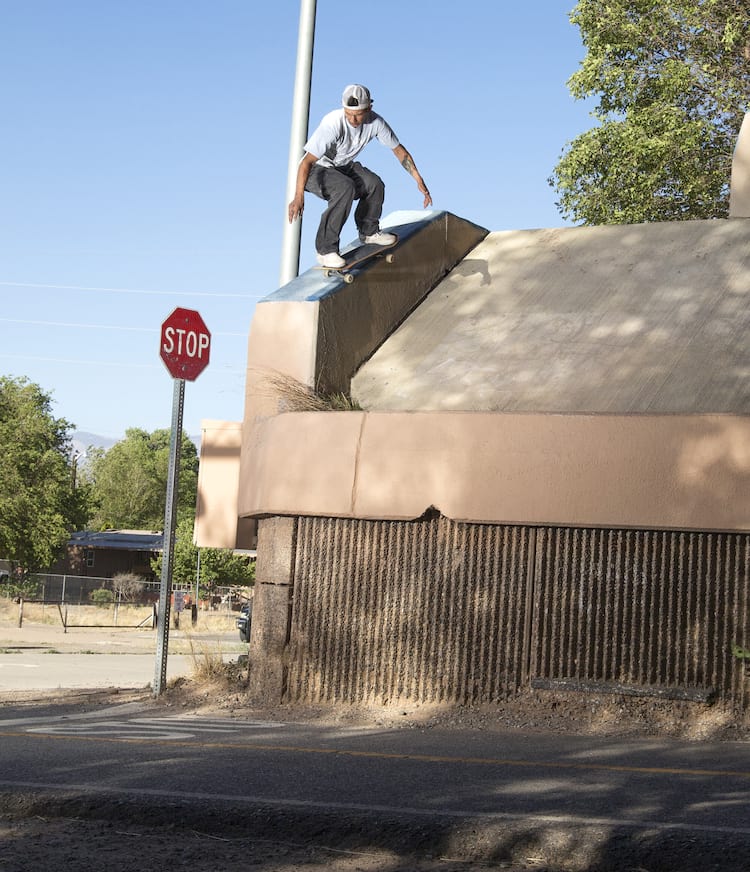 The drop off this back 50-50 is enough to remind you how old you're getting. Jake The Jeweler pushes right through 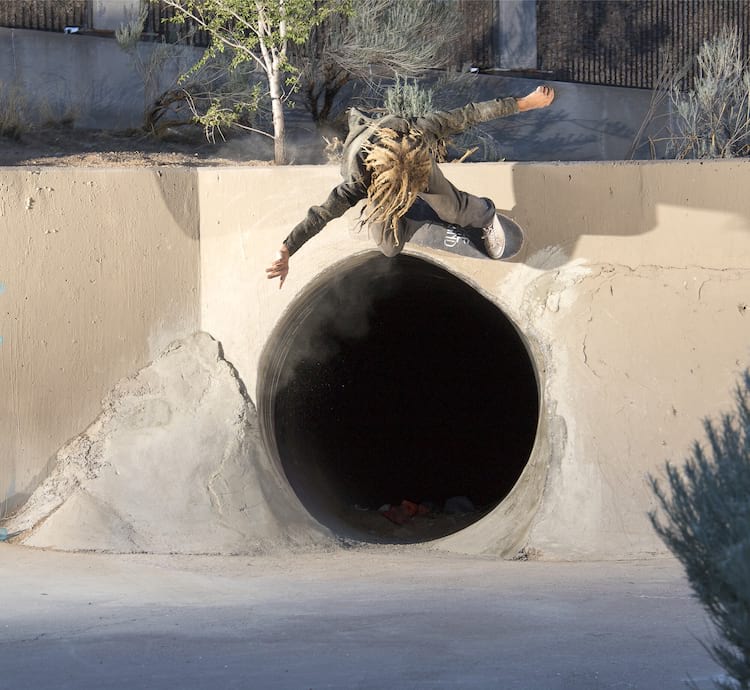 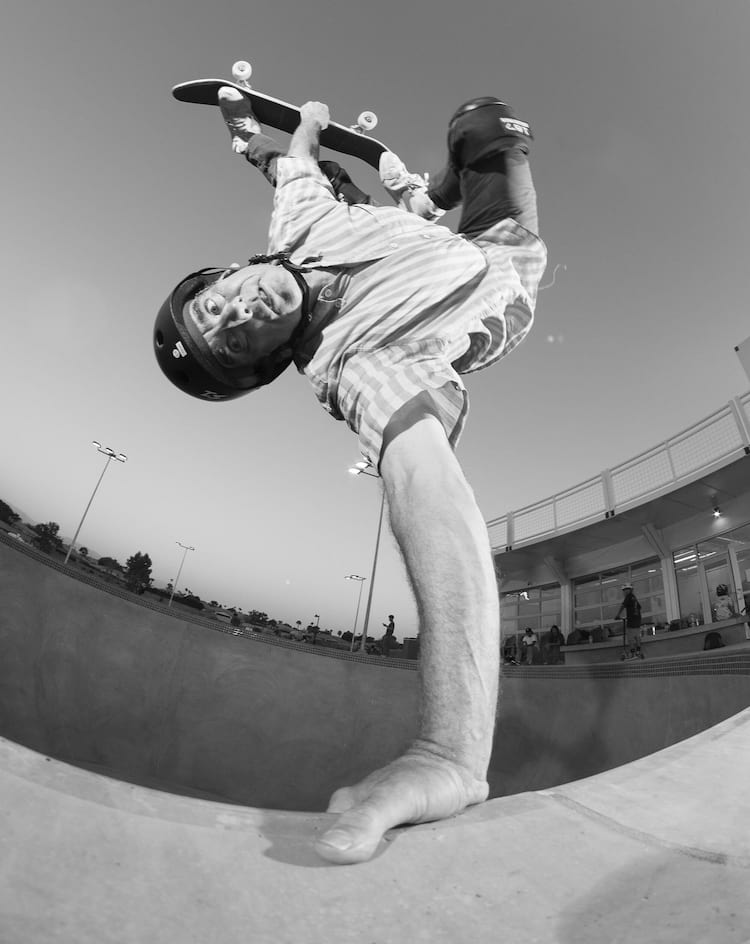 Endling Lance Mountain reminds us why he's the last of his kind with this sad plant. Don't ever stop

You famously buy ads in Thrasher for your video releases on your own dime. What is your motivation behind getting printed in the Mag?
That’s the beauty of skateboarding—you can do whatever you want. It might be a little crazy spending my own money on an ad for a video I made of my friends, but print is everything. It’s tangible. It’ll exist forever. It’s the thing I’ve stared at in mags since I was a child and picked up Thrasher for the first time. I love the art and I want to be a part of the history any way I can.

Is making videos like Endling financially lucrative for you, or is it solely a passion project—or both?
God no. This is literally my blood. I couldn’t imagine doing this as a business. I hate money.
Check out Endling here on the Thrasher site on November 30 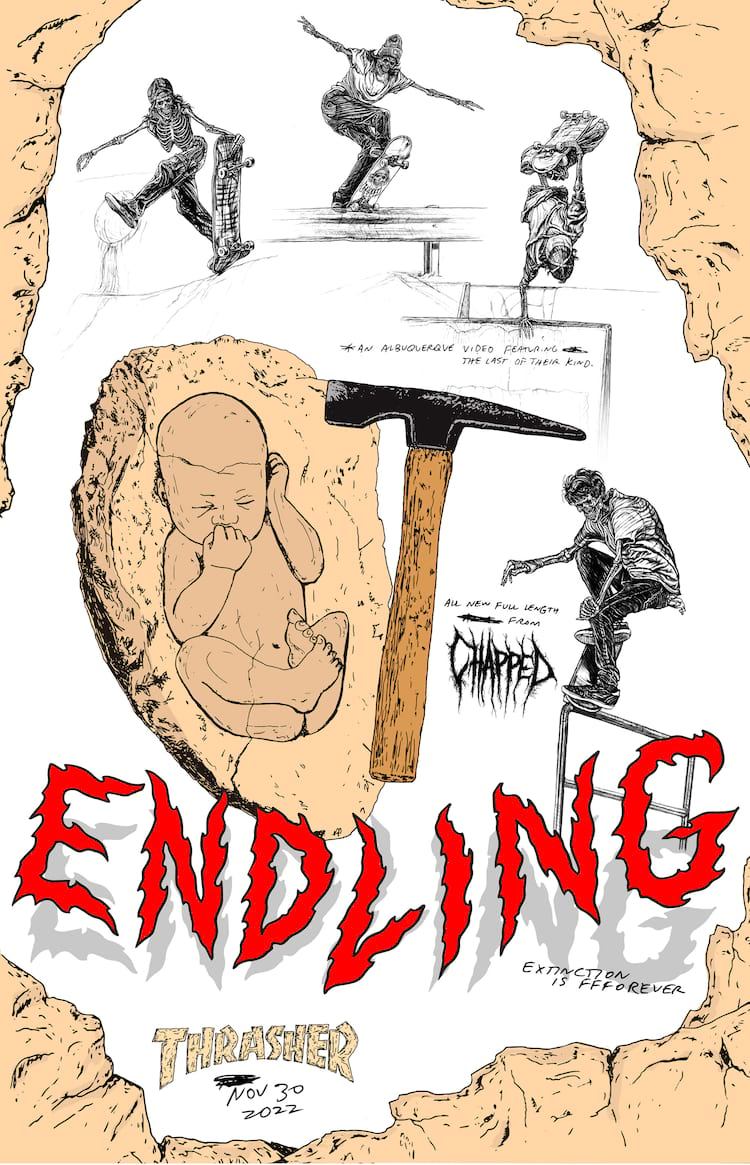